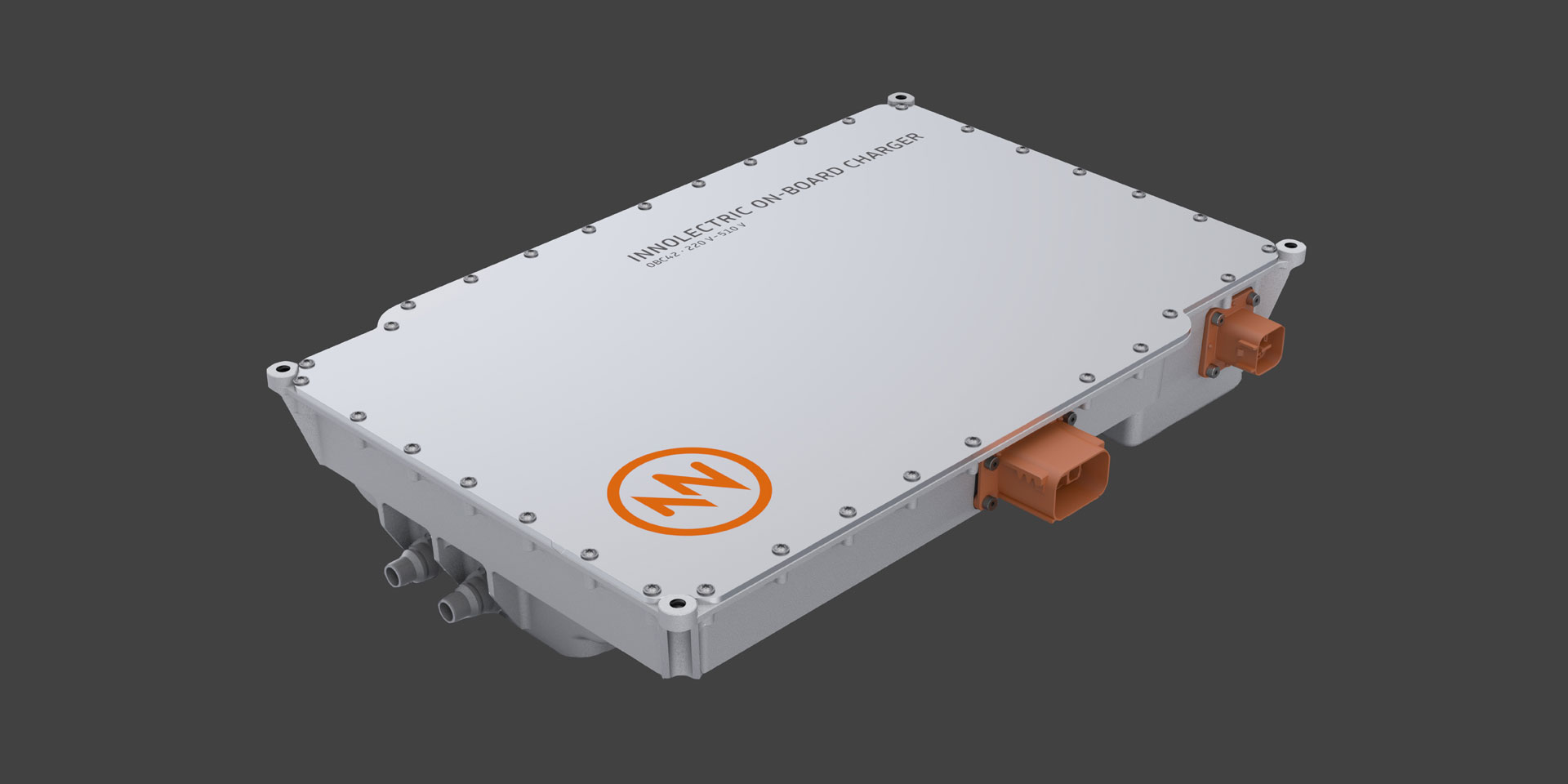 In addition to its highly efficient power electronics, the innolectric On-Board Charger scores particularly well with its intelligent charging communication. With the support of the module “DC Charging Controller” the On-Board Charger enables flexible charging scenarios and supports AC charging with up to 22kW as well as DC charging in the high power range.

The intelligent charge communication module enables the user to flexibly use and charge his electric vehicle according to his needs and existing charging infrastructure without the need for an additional unit. In the DC charging range, the fully integrated charging communication ensures a safe and fast charging process by automatically communicating the maximum charging capacity between the vehicle, charging station and charger. For the user this means a simple and flexible charging application based on established standards such as CCS2 in Europe.

Operational routines for electric commercial vehicles can be very different in everyday life. Sometimes the charging of the vehicle during the day is not possible in between and not in every case there is a charging option for DC charging available. The high charging flexibility of the On-Board Charger therefore represents a great added value in everyday use.

In the first case we consider an electrically powered municipal vehicle used for street cleaning. Characteristic for the daily work are not long distances to be covered – but a permanent use over the shift operation. The municipal vehicle has a battery with a total capacity of 50 kWh.

In this scenario, work begins at 8 a.m., during lunch break the vehicle is connected to a public AC charging station and charged for one hour with 22 kW. The AC charging station infrastructure is already widespread in Germany and can be expanded cost-effectively and in a short time. The battery is charged to 88 % after the charging process. After the remaining shift, the vehicle is taken back to the depot and can be fully charged again within one hour using the DC depot charging station. Up to 14 municipal vehicles can thus be charged overnight with a 50 kWh battery at one charging point until the next work shift. This enables the economical operation of a DC infrastructure in the depot and at the same time reduces the installation effort for the infrastructure compared to AC charging technology, if vehicle rotation is possible. 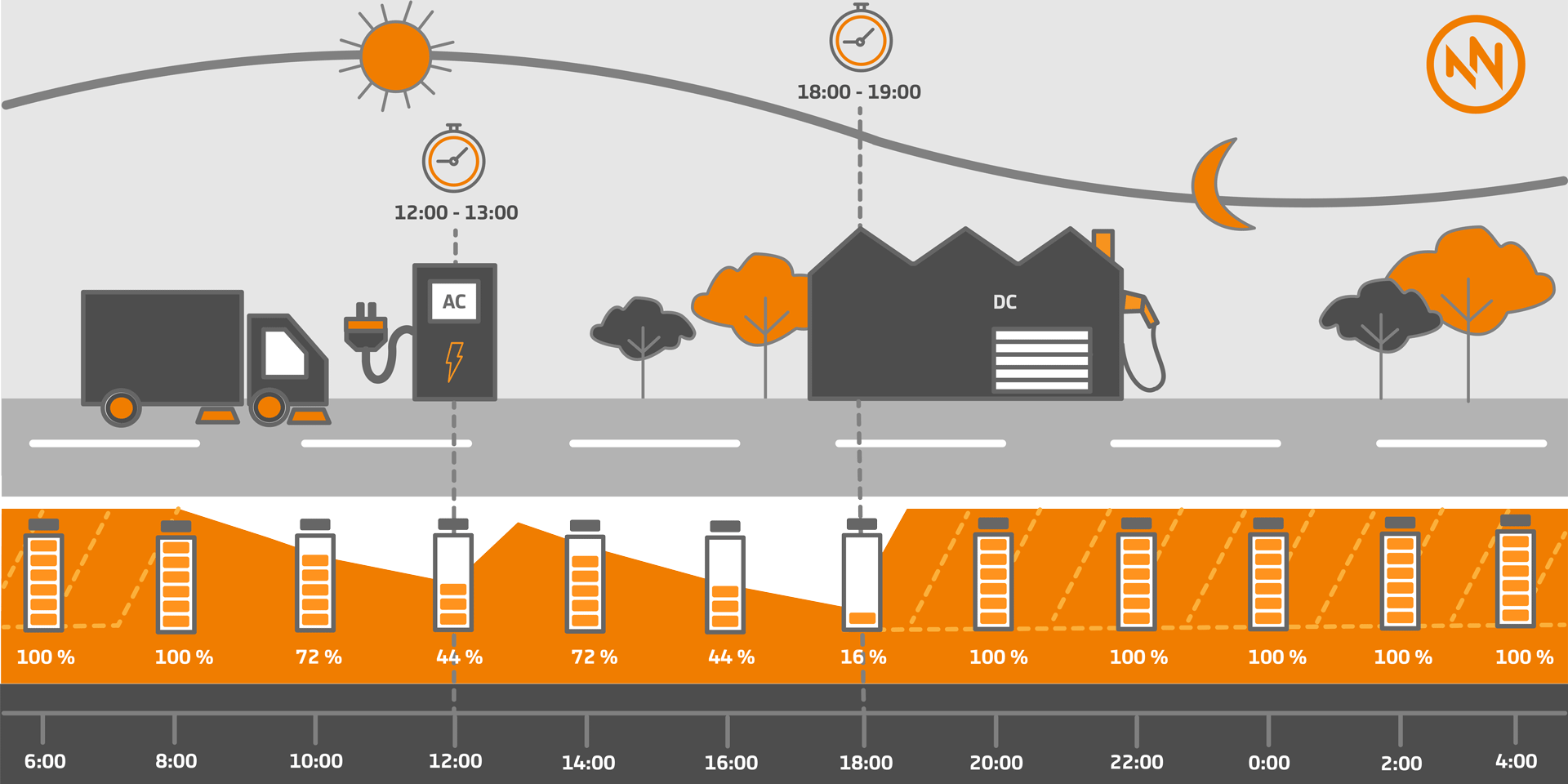 The second typified daily routine refers to a purely electrically operated transporter, as used by parcel services, for example. In this case, the distances covered daily by the vehicle are on average longer than the municipal vehicle from the first use case. The built-in battery here also has a capacity of 50 kWh. In this scenario there is no DC charging infrastructure in the depot. The vehicle fleet is charged overnight in parallel between 8 p.m. and 8 a.m. using AC wall boxes. In this use case, the vehicle is placed in the depot at 6:00 pm and connected to the wallbox at 8:00 pm. The battery of the transport vehicle is fully charged after four hours by using the innolectric On-Board Charger. The following day’s shift starts with a 100 percent charged battery. After four hours of use, the battery is at 50 percent charge. During the half-hour lunch break between 12:00 and 12:30, the vehicle charges at a DC charging station and can start the rest of the shift with an almost fully charged battery. 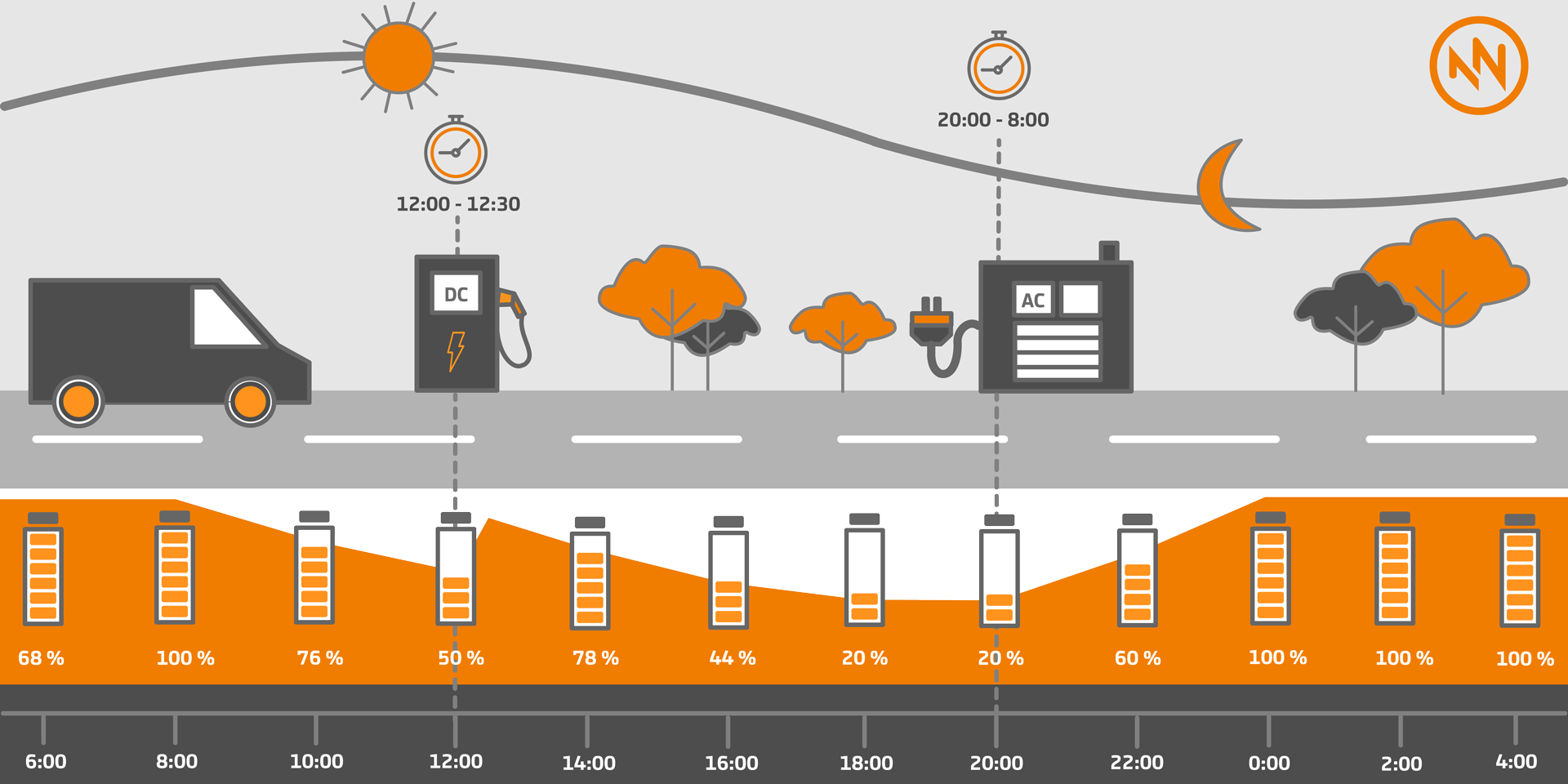 Do you have further questions or are you interested in information about the innolectric On-Board Charger? Please contact us at sales@innolectric.ag.